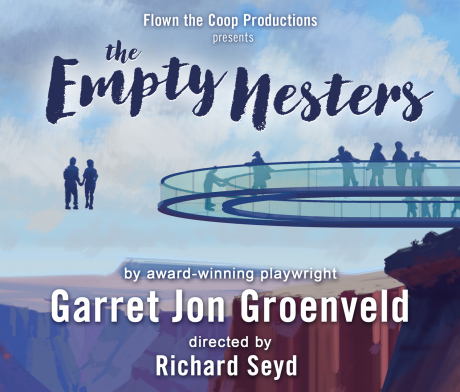 The hit of the 2015 PlayGround Festival in San Francisco, this engaging play follows helicopter parents who take what may be a life-changing trip to the Sky Walk at the Grand Canyon, after delivering their youngest child to college.

The Empty Nesters is directed by multi-award winner Richard Seyd, and stars JW Walker and Pamela Gaye Walker, who reunite on stage after a 20 year hiatus.

Author of “You Know You Are An Empty Nester When...”

Student rush tickets are available one hour before

performance time only. A valid student ID must be

presented at the time of purchase.

Originally developed and presented at the

In the comedy/drama The Empty Nesters, hard working parents Greg and Frances stop for a visit to the Grand Canyon’s breathtaking Skywalk, after delivering their youngest child to college. Instead of seeing a limitless horizon full of fresh possibilities, they face a chasm: the enormity of their next chapter. As they hilariously ponder their past and address their future, there is a total loss of solid footing.

The play received a warm reception in its San Francisco run, with audience members laughing at themselves, as well as wiping away tears. Expectant parents identified, as they exclaimed they were already freaked about their kids leaving the nest someday. Others returned to share the universal experience with their grown children.

Pamela Gaye Walker is an award-winning actress who has appeared in film, television, and on stages in New York, LA, Chicago, SF and across the country.

Director Richard Seyd is a Los Angeles resident, who most recently directed the World Premiere production of The 12 at the Denver Center Theatre, written by Tony Award winning Robert Schenkkan and Neil Berg.

Garret Jon Groenveld is winner of the Internationalists Global Playwrighting Prize and a seven-time recipient of the PlayGround Emerging Playwright Award. His work has prompted Jon Carroll of the San Francisco Chronicle to call him "a treasure of the community.”

The San Francisco Chronicle takes an in-depth look at The Empty Nesters in the Sunday Datebook, May 1, 2016. Writer Michael Rosen follows stars Pamela Gaye Walker and John Walker from their early days, acting together in Wisconsin's Peninsula Players, to his career as a film producer at Pixar and hers as a working actress and mother. Read more here.